Nasus Pharma has developed Taffix® for use in blocking respiratory viruses within the nasal cavity. Taffix is formulated with ingredients designated as Generally Recognized as Safe (GRAS) approved as nasal inactive ingredient and commonly used as excipients in pharmaceutical preparations, in amounts established as safe for use in nasal spray.
Taffix was developed based on established scientific principles and knowledge of the impact of pH on viral survival, combined with precedence for use of gel-based muco adhesives in products intended for intranasal administration to coat the nasal mucosa and block entry of foreign material across the mucosal membrane.
In vitro studies provide proof of concept that support the scientific basis behind development of Taffix. The ability of SARS-CoV-2 virus to pass through a membrane treated with Taffix was measured in an in vitro model using live SARS-CoV-2 virus (Hong Kong/VM20, BEI Resources). Analysis of “flow through” material captured after passing through a Taffix-treated membrane exposed to SARS-CoV-2 showed a measured reduction in virus RNA equivalent to 4 log reduction in virus count compared to that analyzed from material collected after passing through untreated membranes exposed to SARS-CoV-2 under the same conditions. In the same study, Taffix was shown to protect >99% of Vero cells from infection by live SARS-CoV-2 virus.

In another in vitro study, Taffix significantly reduced Influenza A (H1N1) virus infection in Madin-Darby Canine Kidney (MDCK) cells, with anti-viral activity measured within 5 minutes of exposure of the virus to Taffix. Taffix-treated MDCK cells exposed to the H1N1 virus demonstrated 89% averaged cell viability in comparison to 26% averaged viability of cells infected with the H1N1 virus and not pretreated with Taffix. Further, Taffix was shown not to be toxic to MDCK cells.
Another in vitro study showed ability of Taffix to block and provide protection of cells against lentivirus as evidenced by a 97% reduction in cell infection, as measured by fluorescence, after spraying Green fluorescent protein (GFP)-Lentivirus over the resultant gel formed by the Taffix product.

Compelling data generated to date are recent clinical results of a prospective Users Survey of 243 individuals including 83 who used commercially available Taffix during and throughout 14-days following a 2-day community “super-spreader” event in Israel. Results of the survey showed 2.4% (2/83, Intent-to-treat [ITT] population; 0% [0/81] Per Protocol [PP] population) of users versus 10% of non-users (16/160) became infected and tested positive for COVID-19, resulting in a clinically meaningful and statistically significant difference of at least 75% reduction of infection rate between users and non-users. (p=0.037 based on ITT; p = 0.002 based on PP). No safety-related events were reported by Taffix users who collectively commented on the ease of use including incorporating the use of Taffix into their daily routine.
Taffix is approved as a medical device in Europe Israel and multiple countries across Latin America and Asia for indications related to blocking viruses within the nasal cavity. To date, many bottles have been introduced into commercial distribution in these markets with no recorded post marketing safety reports. 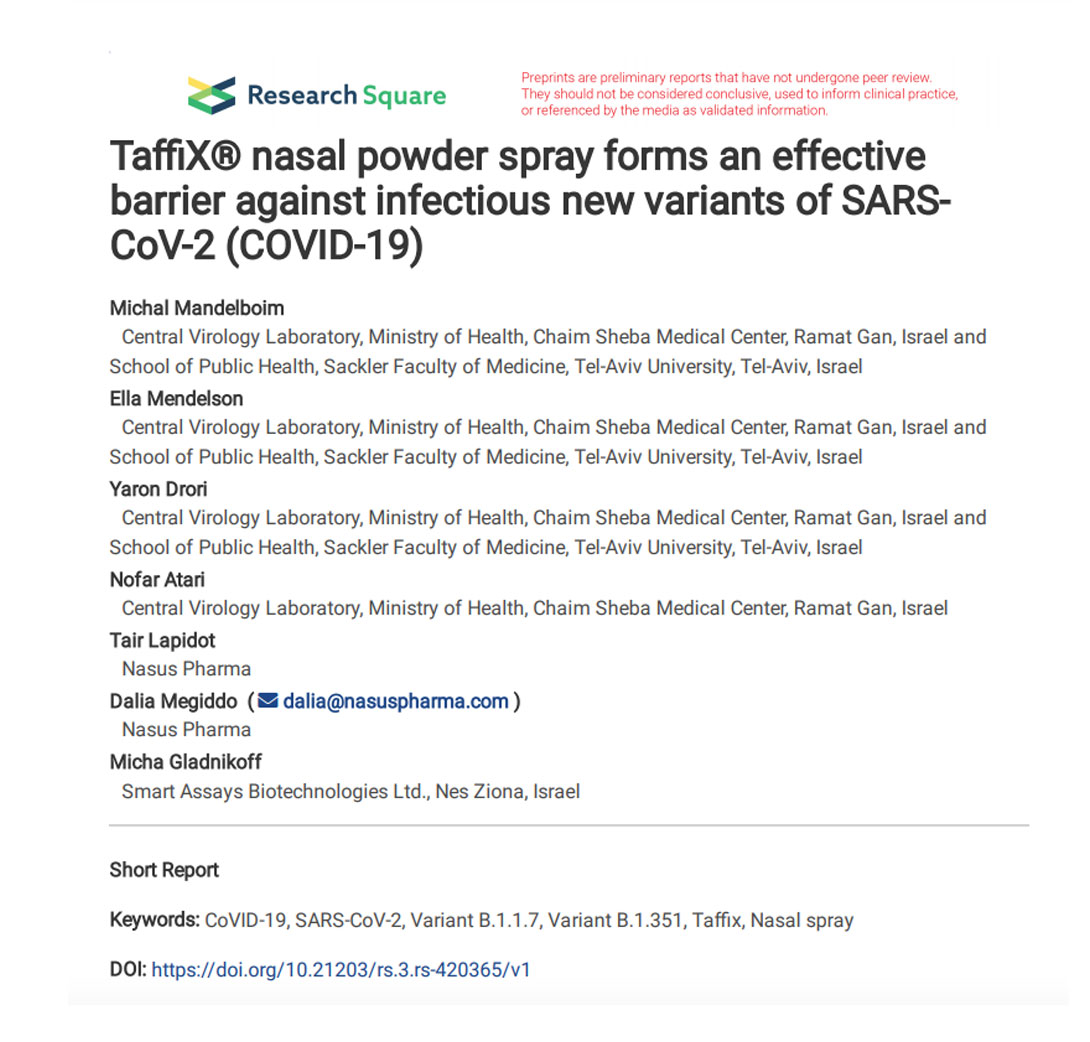 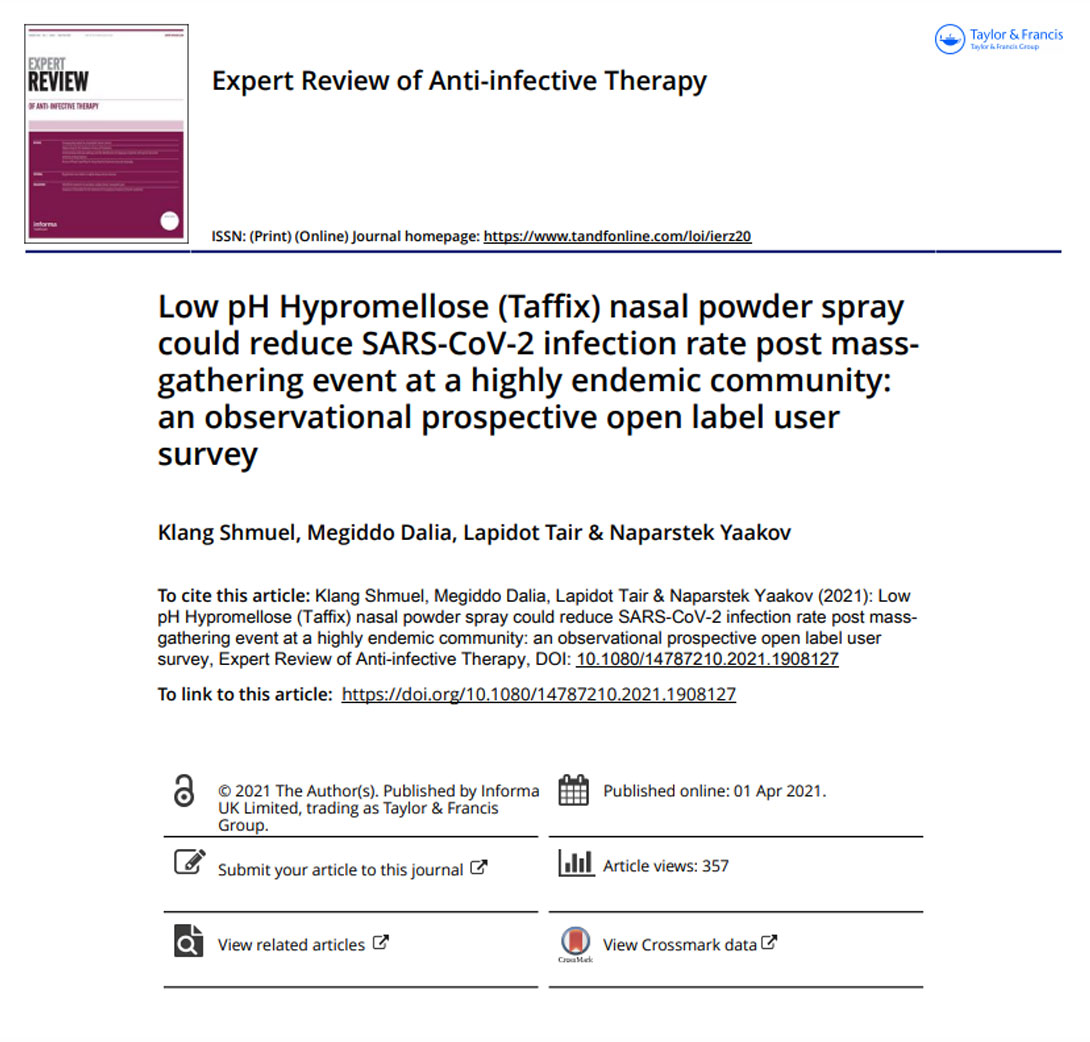 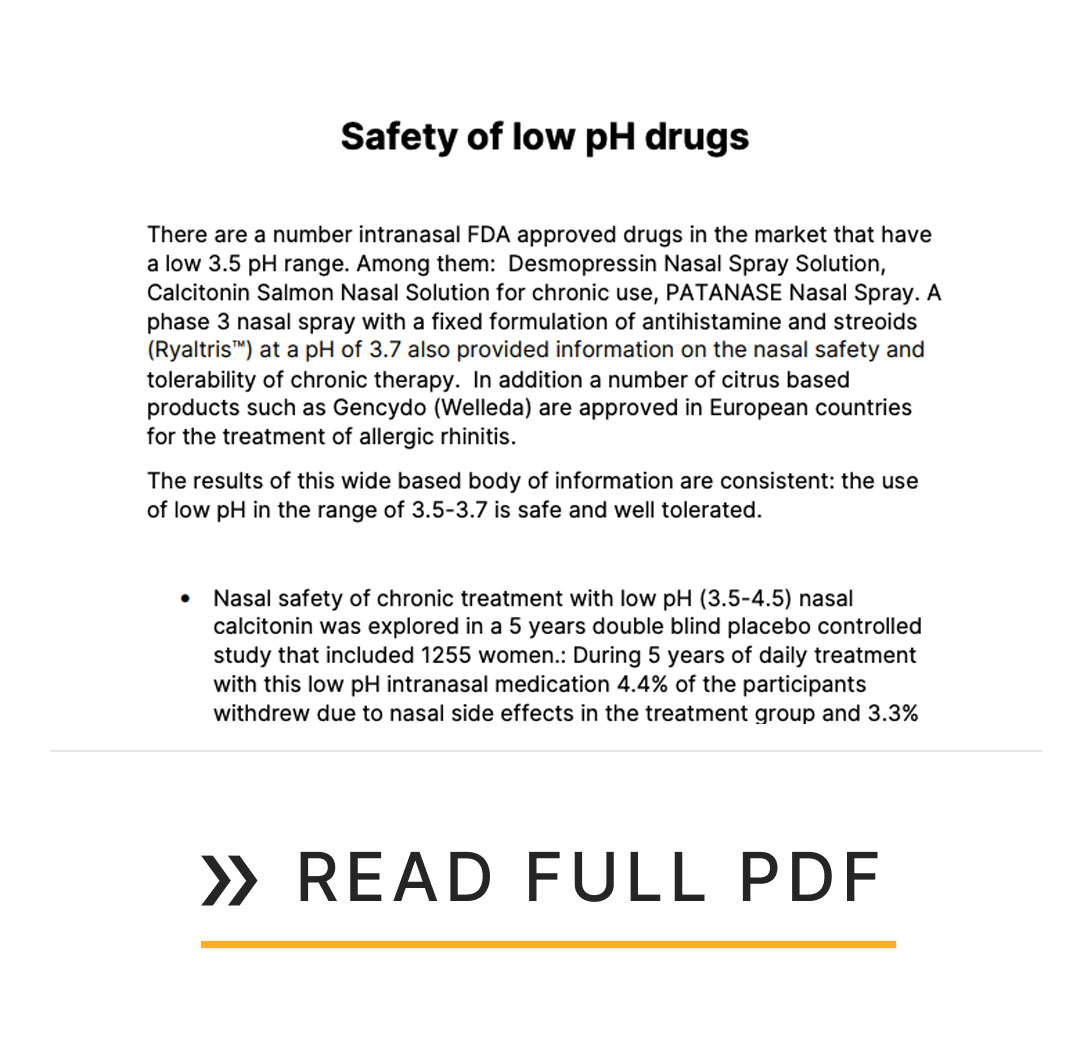 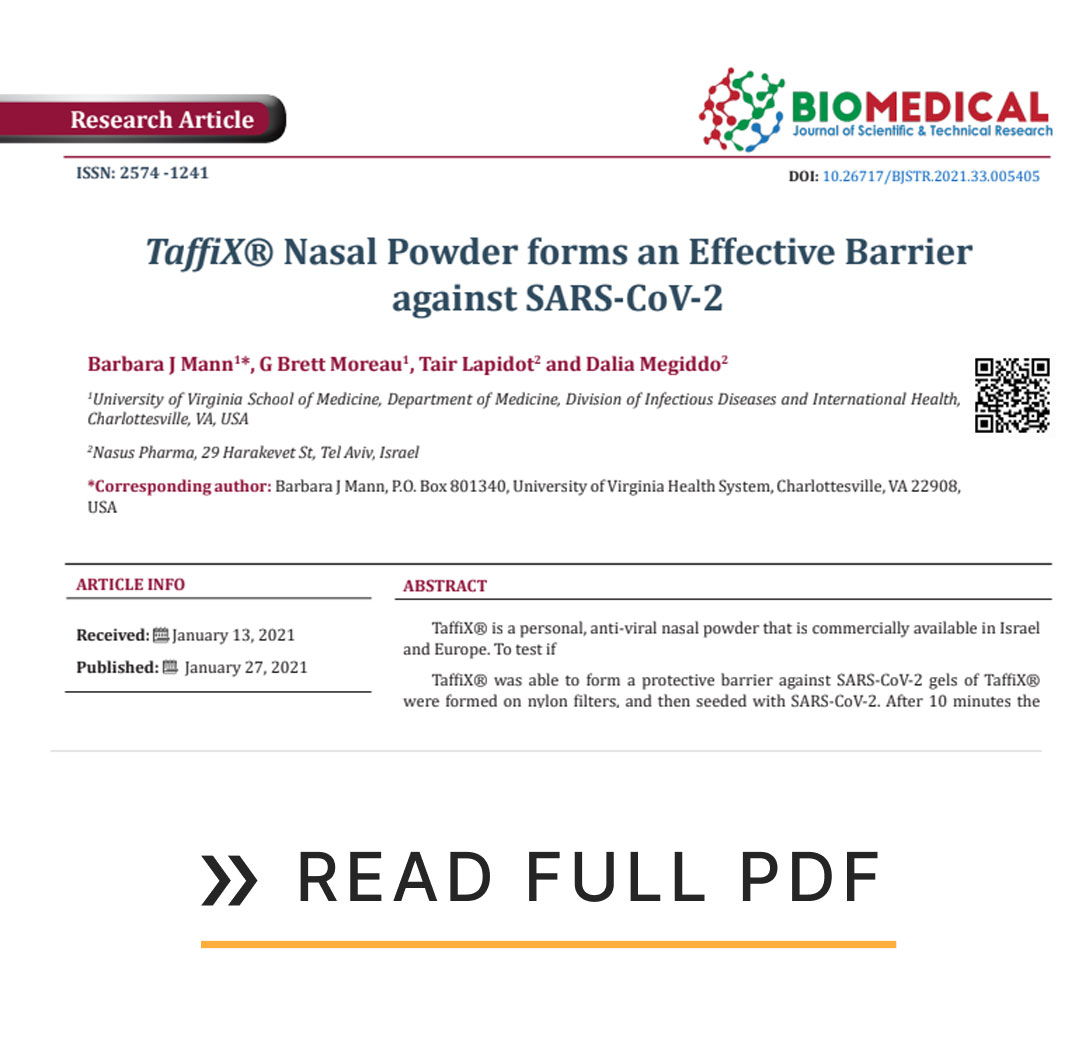 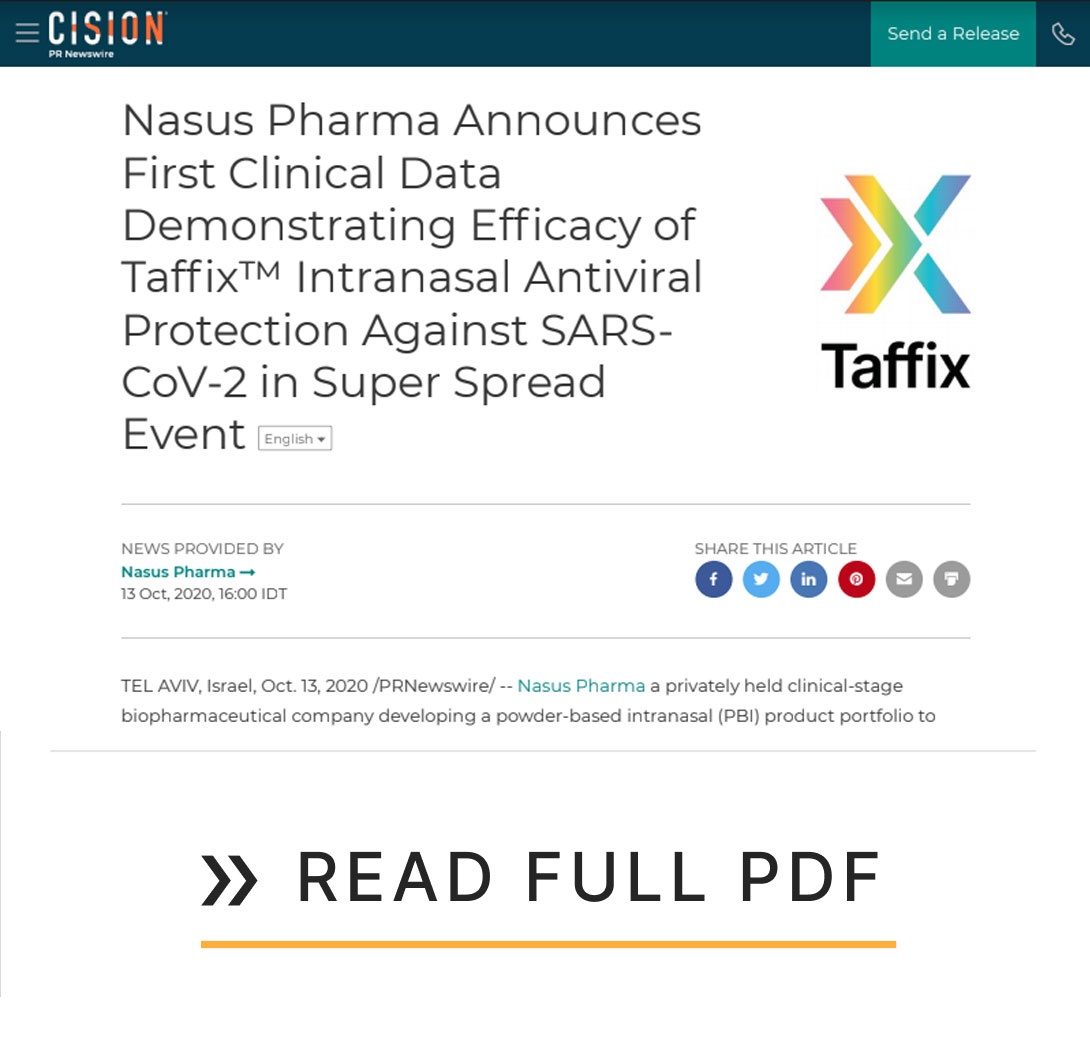